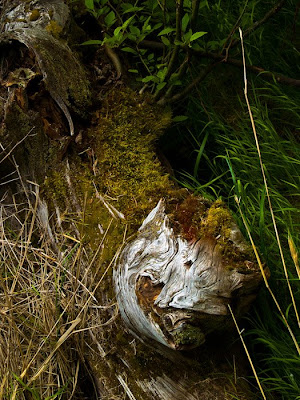 Shot this afternoon at the beach. Not much happening at the beach today, cloudy and cool.

Had a question asked about how this was shot and developed, to which I replied: This was shot from above, looking over a concrete bulkhead. Had to do some fancy moves just to get the shot. I had spent half an hour plodding around in the bear grass looking for something to shoot. As I was walking up the steps to the prom, I saw this log and liked the way it was nestled in the grass.

I bracketed the exposure, getting it right up to where the yellows were starting to blow out on the dead grass. That gave me lots of shadow margin to play with. I usually let the black block up in the shadows during development but don't like blocked negatives if I can avoid it.

PP was something of a pain. Worked it up in two versions, a natural one and a tortured negative version (useful for heavy metal images). I got it looking good in LR2 but when I exported it to a jpg the colors flattened out for some reason. So I had to go back and jack up the saturation and via trial an error getting the final version looking like the LR2 screen. Ended up with thirteen snapshots (LR2) which is a new record. Allows me to go back and recreate the stages of development.

Didn't do any noise reduction beyond the standard color noise filtering in LR which is set to 15. I like noise, so I don't filter for it.
Posted by C. Stirling Bartholomew at 7:12 PM No comments: